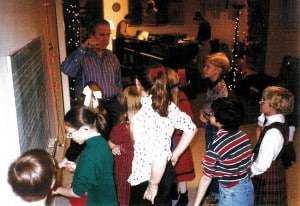 The Shaak Music Studio, as such, started in the late 60’s. Every week each child would have one private or partner lesson with Bernard or Carolyn as teacher and one group lesson, which Carolyn taught. Simultaneously, a unique group class for the parents was being taught by Bernard. At that lesson, the parents learned what the children were supposed to practice the coming week; they even learned to play the duets, whether they had had any piano lessons before or not. They learned about the philosophy behind the teaching, the psychology of working with their children, how to structure the practice sessions at home and what to expect in the early stages. They got their questions aired and answered and seemed to enjoy relating their experiences to the group. 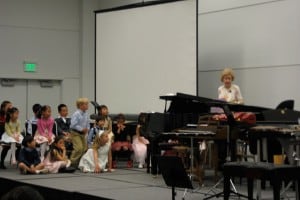 The class really served as a support group for the parents and deep friendships were formed that have stood the test of time. At some point during the class Bernard would bring in one of the children from their group class. He would hear their solos and duets, work on their technique, sight reading, improvisation and originals. It was flexible so that he might get to all the students or just one or two during the class. A huge, beneficial by-product of this format was that the students got to play a given piece not only for their own teacher, but for their peer group, an adult group and another teacher, Mr. Shaak. After all that, performing at a concert, competition or with an orchestra didn’t seem very intimidating!